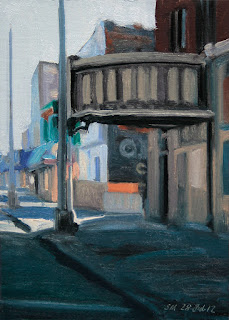 Oil on linen/panel, 2012, 7x5"
click here to bid
Today's daily oil painting is a view of a long abandoned theater  on Woodward Ave near Pasadena in Highland Park.  This  view also shows part of the ghost sign I painted a few days ago.
Click on image for larger view.
#1533
Posted by Stephen Magsig at Wednesday, February 29, 2012 1 comment: 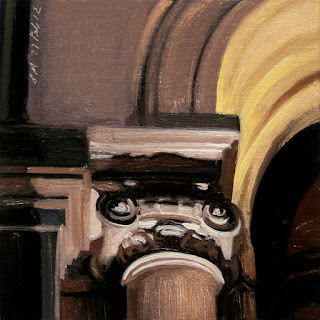 Oil on linen/panel, 2012, 5x7"
click here to bid
Today's daily oil painting is a detail view of an arch and column on the front facade of the Detroit Institute of Arts on Woodward Ave in Detroit. There has been some talk about selling a few of the gems from the DIA's collection if an emergency manager takes over the  City of Detroit.  Click here for recent discussions on this topic.
Click on image for larger view.
#1532

Realism from the USA and Canada 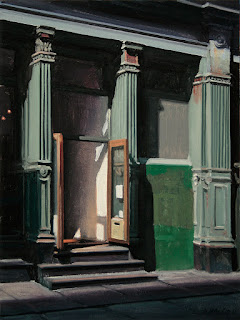 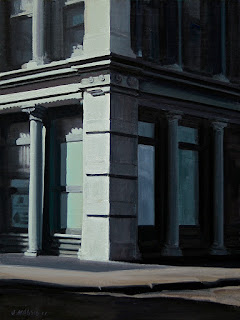 
A new exhibit opening this week at Peter Walker Fine Art Gallery in Adelaide, South Australia,  was born from the relationships made between artists on the internet.  Curated by Australian painter Jim Thalassoudis, More Real than Real, features American and Canadian realist artists who might not have had the opportunity to exhibit together, let alone in Australia, had they not been introduced to each other and each other's work through the web.
Coinciding with the Adelaide Festival of Arts, the show will run from March 1st through the 17th.  It is the fourth large venture generated by Cube Contemporary Art Projects, a non-traditional art gallery founded by Thalassoudis and fellow-artist Dianne Gall, which works with other display spaces to generate exhibitions "locally, nationally, and internationally."

During the 2012 Adelaide Festival in March we are very excited to be able to present a group of realist paintings by artists from the U.S.A. and Canada in
the exhibition Realism from the USA & Canada.
This exhibition is being presented in conjunction with Cube Contemporary Art Projects and has been many years in the making.

It promises to be a wonderful opportunity for an Australian audience to view the latest in international realism art trends from some of the most accomplished artists in this field.

All prices are in Australian dollars and include GST. International currency fluctuations may result in slight price changes.
Click on image for larger view.
#1531A Oil on linen/panel, 2012, 5x7"
Click Here to Purchase
Today's daily oil painting is a view of a ghost sign on a Woodward Ave building near Pasadena. This is around the corner from the Pasadena painting from a few days ago.
This wall was revealed when the adjoining building burned down and was removed.
Click on image for larger view.
#1531

Posted by Stephen Magsig at Monday, February 27, 2012 No comments: 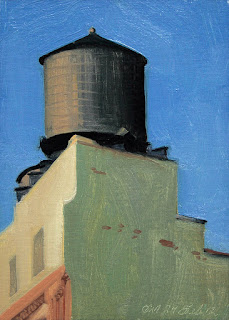 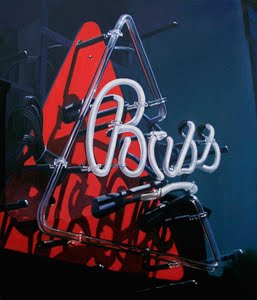 Postcards from Detroit is a visual diary of Detroit in daily paintings. The inspiration came from Duane Keiser's innovative A Painting a Day blog, and Julian Merrow-Smith's Postcard from Provence. 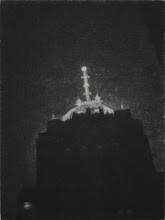 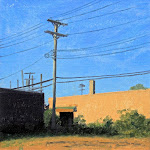 ALL BOOKS AVAILABLE AS E-BOOKS FOR IPHONE AND IPAD

We are fine artists living in Ferndale, MI, with our two studio cats, Artie and Bella. We have been subletting a painting loft in New York City for the last 15 years.

Stephen
I have studied at Ferris State College, and the College for Creative Studies. I have been painting for over 30 years. I have had more than 25 solo shows and numerous group shows. I currently show with the George Billis Gallery in NY and LA, and with the David Klein Gallery in Birmingham MI. My work is in over twenty-five corporate and museum collections and in hundreds of private collections.
I can be contacted at: smagsig@wowway.com

Janet
I studied at Ringling College of Art and received my BFA from The College of Creative Studies. My background is in lithography, etching and painting. I have exhibited with Lemberg Gallery, Ferndale, MI for many years before they closed, and with the George Billis Gallery in NY since 1999. I have been in group exhibits in Europe and the USA.
My art can be found in corporate and museum collections.

Thank you for visiting this site.
I can be contacted at jhamrick@wowway.com

Don't forget to look at the monthly archive. Hope you enjoy them. Thanks for visiting!